Old Pipes vs. New: They Just Don’t Make ‘Em Like They Used To

By GGSJuly 23, 2021Early Detection, In the Field, Maintenance and Planning, Non-Destructive Testing
No Comments

In another story of ours about the speed and sensitivity of the LIXI Profiler, we mentioned a six foot section of pipe at a beverage plant that was perplexing – it had been welded into an older pipe, yet measured as thinner than the original.

This finding surprised us as well as the plant manager on the job site. After all, this newer segment of pipe should be in better shape than the rest. The newer pipe was not corroded, so there had to be some other explanation.

This prompted us to do some research about how pipe is made. Perhaps a pipe manufacturer could shed some light on our situation. We contacted a few mills and then talked to a pipe distributor who initially didn’t enjoy our line of questioning.

“Do you have a problem with our pipe? It’s still within spec!” he exclaimed.

We assured him the pipe was fine. We just wanted to know more about the process. Had there been any changes in the pipe creating process that would cause new pipe to be thinner?

Eventually, we did get in touch with an engineer at a mill who was exceptionally helpful. He explained that in the late 1990s and early 2000s, mills started using more efficient equipment and processes to produce their pipes, with most major mills employing the “continuous mandrel” method. 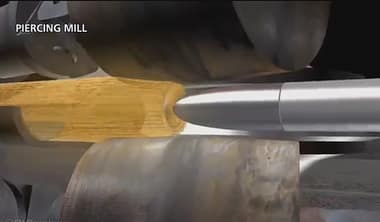 In this process, the manufacturer pierces a hot metal cylinder to create a tube, inserts a solid bar into that tube to keep the inner diameter consistent, and then starts shaving down the outside. Therefore, the inner diameter of the pipe remains at the desired thickness, while the outer diameter is uniformly trimmed.

This allows mills to get within thousandths of an inch of the overall pipe thickness they are targeting. The increased accuracy mean less excess metal than was present in pipes created by earlier methods and therefore less thickness to the pipe walls even as they come off the production line.

Since manufacturers buy steel by the pound and sell pipe by the foot, there was also a financial incentive to make pipes as thin as possible within tolerance limits.

So, that explained how our six foot segment of pipe at the beverage plant could be thinner than other sections while not being corroded. But what is the potential impact of the updated manufacturing methods going forward?

Well, as our pipe distributor noted, the newer pipes are still up to code. In fact, we recently took measurements at plant had only existed for five years. All of its pipe was at nominal or below, but within the 12.5% tolerance limit. By comparison, we find that the older manufacturing methods had a built-in margin of error, creating pipes that regularly measure 20-30% thicker than nominal.

That means older pipe started thicker and could actually corrode down to nominal wall. Therefore, even with some corrosion, those pipes can still be more efficient than the new pipe fresh from the mill. Due to manufacturing variances, pipe manufactured prior to the mid 1990’s (“old pipe”) had actual wall thicknesses commonly in excess of the nominal thickness (0.218″).

Due to improved manufacturing techniques, pipe manufactured after the mid 1990’s (“new pipe”) had actual wall thicknesses commonly less than nominal thickness, routinely delivered at or slightly above the minimum allowable thickness (87.5% of nominal or 0.191”).

Because newer pipe starts thinner, any corrosion will have an impact on performance much more quickly. After all, it is not the amount of pipe thickness that you have lost that matters, but how much you have left. You could actually have a bunch of old, corroded pipe in your facility that still has more thickness than what is coming off the lines at today’s mills.

We have since discovered that we weren’t the only ones in the dark about how the changes in the pipe manufacturing process have impacted pipe thickness. Most of our clients don’t know their newer pipes are thinner until we tell them.

We advise those with newer plants to have their pipes measured as soon as possible in order to establish a baseline. Often times, we are brought in to inspect old pipes after signs of corrosion appear. But by measuring pipes—even newer ones—prior to that point, we can give you greater certainty about the life expectancy of your pipe and also potentially help you have a greater number of options for handling any issues.

There are better options than simply ripping out old pipe that has a few brown pits. For example, in some cases a solution such as a gel that arrests corrosion would be less expensive and would also leave you with thicker pipe—and more years of service—than welding in a new replacement.

If you are wondering what to expect from your pipe, try to determine when it was manufactured. For a more specific baseline, get your pipes measured. Then you will have a good idea what the life expectancy should be.