This paper presents actionable data to help system managers develop an approach for monitoring and managing the integrity of their piping that respects available time and funds, and meets requirements set by the United States Environmental Protection Agency (US EPA) and Occupational Safety and Health Administration (OSHA).

Piping corrosion can be a catalyst for an ammonia release and unlike most equipment found in ammonia refrigeration systems, piping does not come with a manual, and industry standards are general in nature.

The analyzation of Non-Destructive Testing (NDT) samples on refrigeration piping has revealed indicators for early detection of risk. By comparing the testing results directly to documented field observations and specific characteristics, we are able to identify patterns and suggest evidence of stability or weakness based on common factors.

With this quantitative information, we are able predict prime CUI breeding locations and indicators that corrosion is present in piping – bare and insulated. By understanding where and why issues are likely to occur, system managers can streamline their efforts.

We will demonstrate how corrosion manifests on piping, common areas of susceptibility, what to look for in the system to indicate CUI is present or has potential to occur, prevention, and how to classify and manage suspect areas.

Forthcoming recommendations related to general indications of susceptibility is based on 20+ years of evaluation findings. The data provided herein is current industry results, based on a study of ammonia refrigeration systems evaluated in the U.S. over the course of one year, from June 2021 to May 2022.

Armed with this material, one will be able make better assessments, execute informed decision-making including prioritization and funds allocation, and avoid factors that are a catalyst for CUI and a release.

The Greatest Threat to Your Piping – Corrosion

Corrosion Under Insulation (CUI), or external corrosion, is the primary damage mechanism that affects the integrity of ammonia piping. Moisture enters the insulation and becomes trapped against the pipe, vessel wall or valve and corrosion forms on the surface. Corrosion does not exist at every instance of trapped moisture, but over time it will manifest and expand if not addressed. If left unattended, the corrosion will persist and eat away at the exterior wall of the piping, thinning the metal to the point of failure.

There is no one size fits all for how much moisture will infiltrate the insulation or how quickly it will corrode the pipe. While some coastal regions do experience a higher level of insulation moisture contamination due to the environment, the floor and ceiling of threat and resulting damage varies due to many factors.

Corrosion does possess elements of predictability, including its materialization in common areas and environments. However, biological growth on the jacketing or insulation or excessive ice build-up, which are both visual indications that corrosion may be present on your piping, do not always occur. Far too often corrosion will thrive with no visual indications, fully concealed by the jacketing and insulation that propagate its existence.

Moisture is usually introduced where insulation has deteriorated, at breaks in insulation, where caulking has failed or where damage has occurred as a result of impact, service, or the elements. Therefore, all piping in an ammonia refrigeration system is subject to degradation and preserving the vapor retarder where possible is essential. 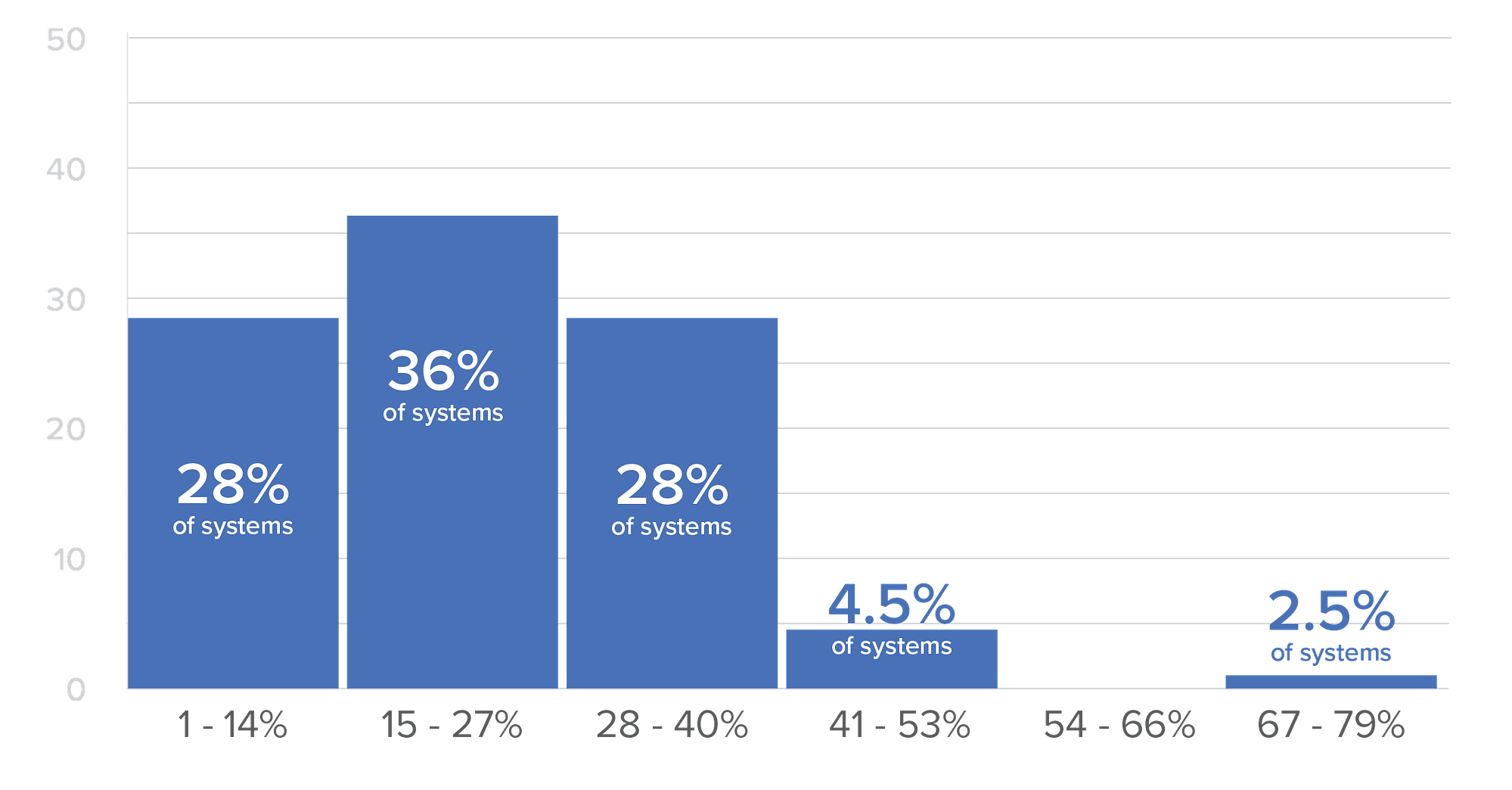 Where CUI Decays the Surface of the Pipe

Due to the variables present, progression time from moisture entering the insulation to the point of failure varies. Therefore, the rate at which external corrosion thins pipe wall in an ammonia refrigeration system is not calculable. The ambient temperature along with the amount of moisture (and its rate of expansion) are not controlled.

These variables also make it impossible to determine distribution of corrosion around the circumference of the pipe. Oftentimes, moisture collects (or pools) and rests on a concentrated area of the pipe. Fully soaked insulation leads to corrosion that forms evenly around the pipe, especially on vertical runs.

Corrosion rate cannot be calculated in ammonia refrigeration like other industries.

These conditions typically occur in thermal cycling areas like from the DC tee to suction lines, any other lines that are or will be above freezing such as HGD lines, and equipment that is run periodically.

It is common to assume suction lines are not susceptible due to their ‘constant’ below freezing state. However, it only takes a few days for these lines to be above freezing for the ice to thaw and introduce moisture that begins to corrode the pipe. Further, when these lines refreeze, they swell and the corrosion and cracking is more destructive. 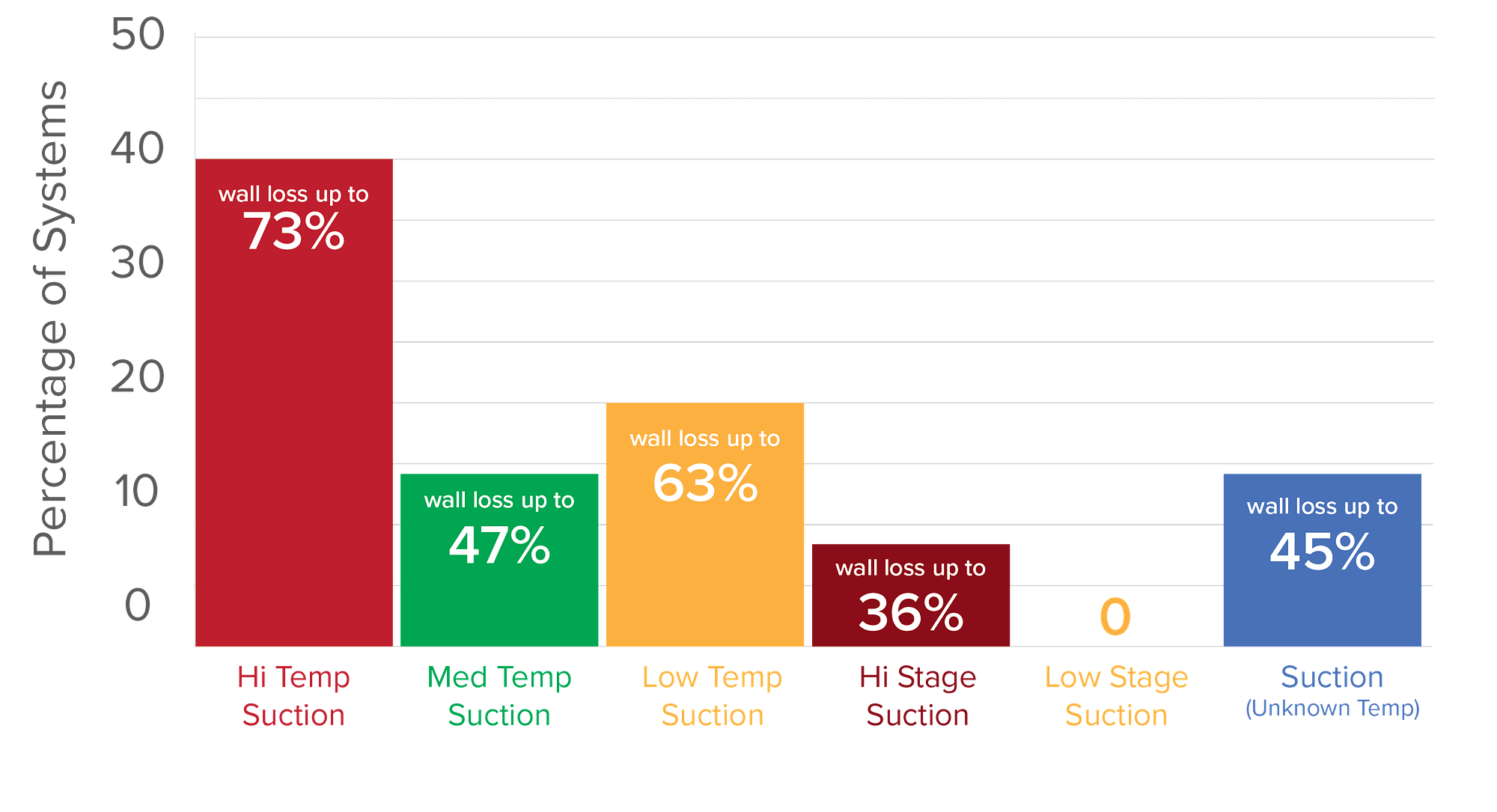 *Loss less than 25% not included in results

While you are likely employing practices to prevent and manage degradation, with regular inspections you will be able to predict prime CUI breeding locations and detect where corrosion is or may soon be present in the system.

Predicting Threats to Your Piping

2. In addition to damage being a reliable catalyst for CUI, the areas where piping is most vulnerable are: 3. The location of a component or structure can pose a problem for ensuring the integrity of the piping. Regularly inspect: 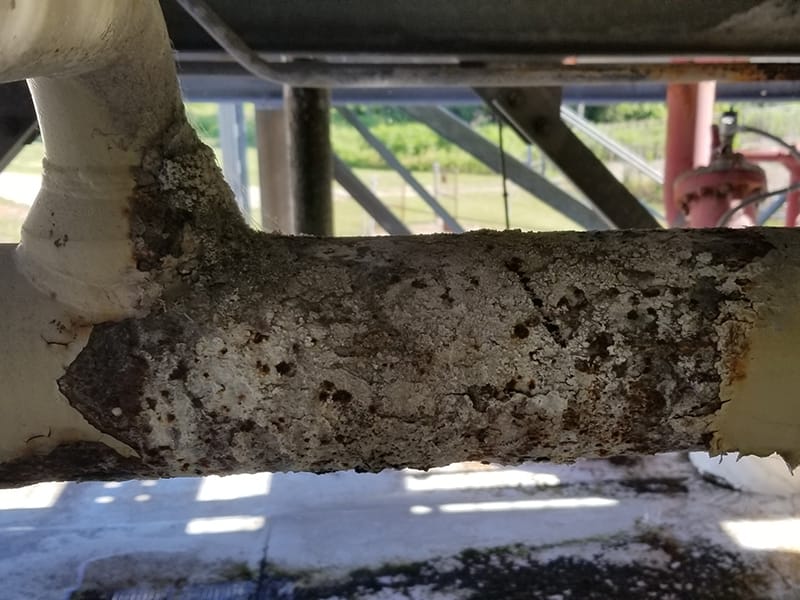 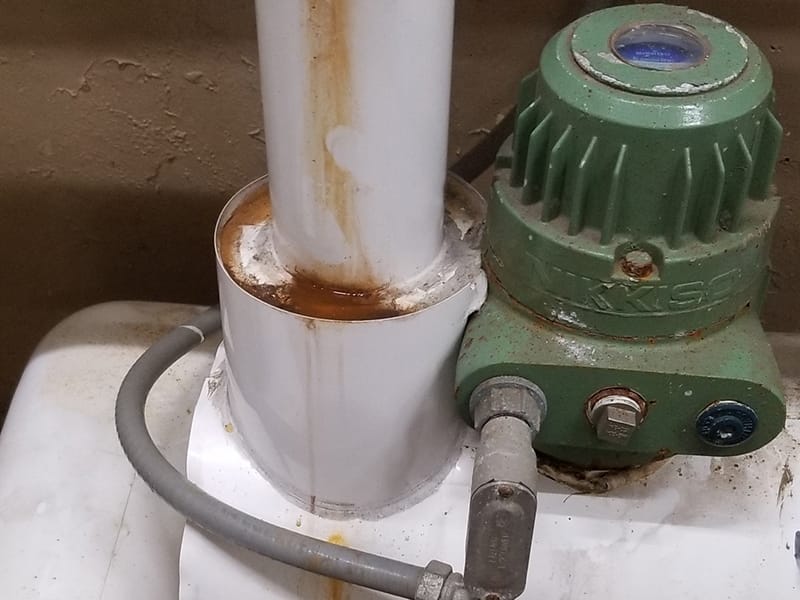 4. Improper design, poor installation or maintenance, and use of the wrong materials can be equally devastating to piping and other components of ammonia systems. Look for: 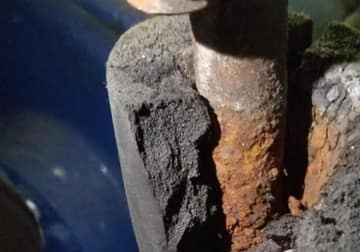 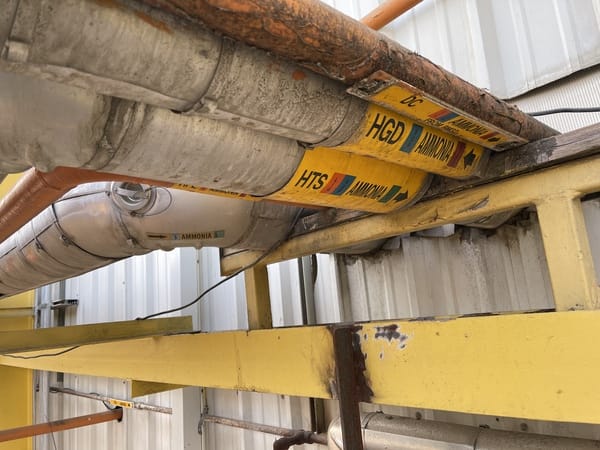 Pinpointing Threats to Your Piping

Unfortunately, corrosion under insulation does not always present itself visually; it is common for CUI to hide hints of its existence. Implementing Non-Destructive Testing to evaluate common areas of failure will help you locate the ‘invisible’ locations where wet insulation and corrosion exists.

Conversely, often times because the corrosion has advanced the system will show fail-proof indications, or warnings, that the piping is compromised.

Visible cues reveal that moisture is trapped in insulation or corrosion has materialized on insulated piping. Look for:

1. Moisture dripping or ice forming around the pipe. This is a sign that the insulation saturation has exceeded containment within the jacketing. Ice build-up on insulation typically occurs when water has compromised the vapor retarder resulting in ice being present from the surface of the pipe, all the way through the saturated insulation to outside the insulation jacketing.
2. Biological indicators such as algae, moss or plants growing on the insulation.
3. Rust stains on the floor of engine rooms. Often times, this is found near valve groups where the defrosting process produces excessive water exposure.
4. Rust stains on the insulation jacketing. Rust staining or rust colored water from within the jacketing occurs as a result of degradation of piping or components contained inside the jacketing and insulation.
5. Sagging areas on a long run of pipe.
6. Painted corrosion. If the surface is not well cleaned of all rust before coating, paint will incubate the active corrosion and exacerbate the issue. 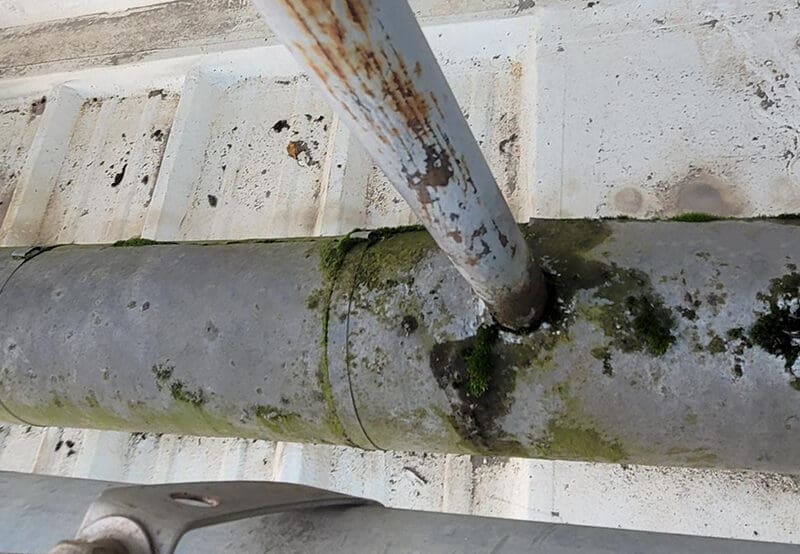 Building a Framework for Corrosion Intervention

Due to unavoidable variable, there is no reliable formula that derives how much corrosion can occur or how quickly it will advance. Quantitative data reveals that piping exhibiting any of the aforementioned characteristics should be regularly monitored because the formation of CUI and thinning of pipe wall is imminent if not corrected.

Daily system walkdowns and annual Mechanical Integrity inspections should document these suspect areas. Further investigation, maintenance, or replacement of suspect or compromised piping in the system should be prioritized based on the level of severity. On the grounds that all CUI does show visual indicators, further testing
should occur at common areas of failure.

At the top of the action list for resolution should be piping where leaks or fumes are present. Ammonia fumes are usually due to poor packing on the stems of solenoid valves that are actuated; tightening the packing nuts should resolve these leaks.

Where corrosion is present, remaining pipe wall must be measured to make an accurate assessment of priority. Corrosion on bare piping and CUI take on multiple forms and vary in how aggressive the corrosion advances.

Generally, blister rust is the most concerning. If your piping shows layers of peeling rust (or ‘blistering’) the corrosion is advanced, and the remaining wall thickness is likely not suitable for operation. The general rule of thumb for companies that exercise a conservative approach is to replace piping that exceeds 50% wall loss.

Pitting corrosion is the most common form of corrosion found in refrigeration systems. Pitting is usually a slow process causing isolated, scattered pits over an area. Contrary to blister rust, pitting and swelling rust both look severe, though oftentimes the piping can remain in service. Where piping has suffered wall loss in the range of 30-50%, the pipe needs to be cleaned of all corrosion and coated to protect from future effects of moisture. 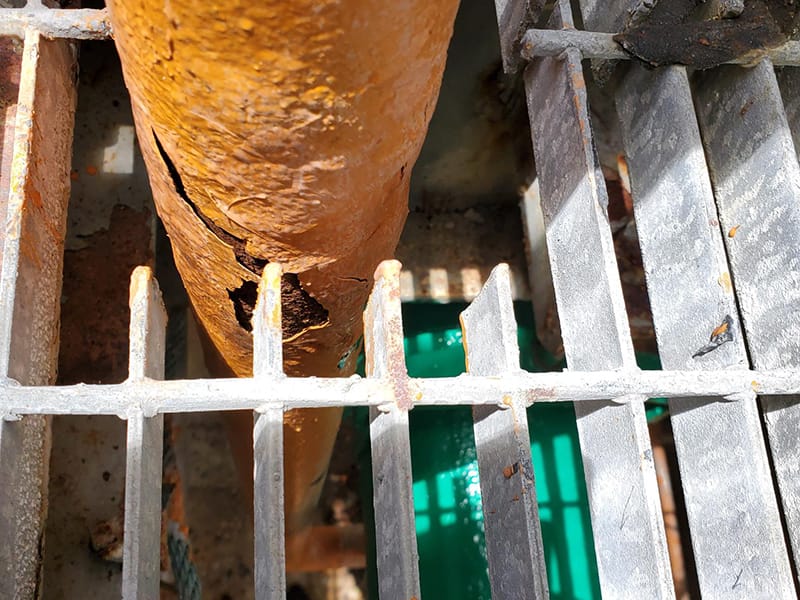 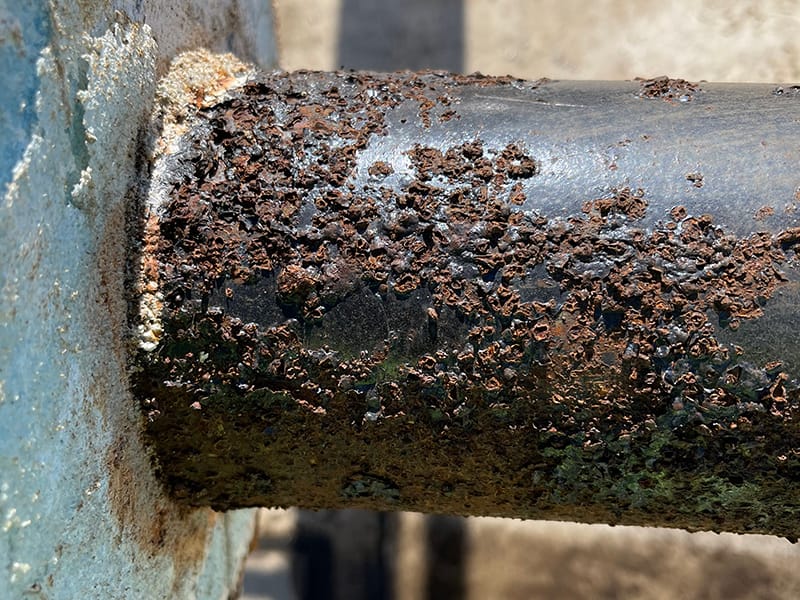 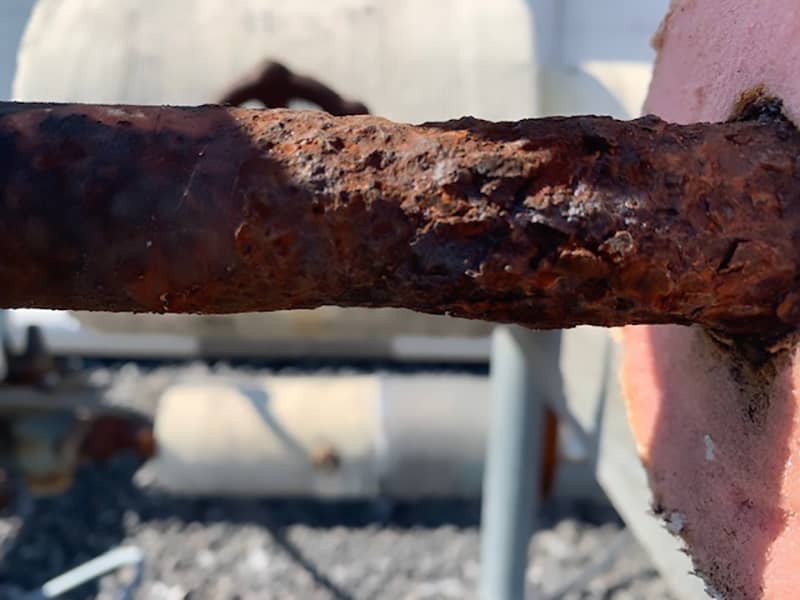 Areas of wet insulation on piping with zero or lower wall loss (up to 30%) should be monitored for advancing corrosion. When replaced, insulation installation should  include a vapor retarder applied directly to the pipe surface for assurance of an intact barrier to protect against subsequent infiltration.

Damaged and split jacketing, failed caulking, sealing points, and improperly oriented seams should be addressed promptly. Be sure to replace any wet insulation and clean piping in these areas so improved joints and sealants do not successfully trap existing moisture in the jacketing.

Lastly, other vulnerable areas of your system due to proximity or design should be resolved if possible and inspected regularly to prevent degradation.

GGS will help you verify the mechanical integrity of your piping.

GGS Non-Destructive Testing services confirms fitness for service on your piping and vessels and locates and measures wet insulation and pipe and vessel wall thickness throughout your system.