OSHA’s Process Safety Management of Highly Hazardous Chemicals Standard (29 CFR 1910.119)(j)(5) requires “The employer shall correct deficiencies in equipment that are outside acceptable limits (defined by the process safety information on paragraph (d) of this section) before further use or in a safe and timely manner when necessary means are taken to assure safe operation.”

The piping in your system covers a large footprint of the equipment that is susceptible to ‘deficiency’. Implementing a baseline for your organization that defines specific action at different severity levels of piping deterioration, and what those levels are, is a necessary inclusion for operating within the parameters of PSM and RMP requirements.

The damage mechanism that thins pipe wall in ammonia refrigeration systems is Corrosion Under Insulation (CUI). Water or condensation breaches the vapor barrier and rests in the insulation against the surface of the pipe metal. Piping with moisture in the insulation becomes corroded and eats away the metal on the pipe surface, thinning the pipe wall.

The rate at which corrosion thins pipe wall in an ammonia refrigeration system is not calculable. Variables such as pressure, velocity, acidity and the amount of moisture (and its rate of expansion) are not controlled. ‘Corrosion rates’ are only valid for erosion/corrosion occurring internally in piping systems; ammonia is not a corrosive chemical to carbon steel or stainless steel piping. Therefore, piping used in closed-circuit ammonia refrigeration systems is generally not susceptible to internal corrosion, and the application of corrosion rates are invalid.

Thresholds and decisions to take action to maintain or replace piping must be based on current pipe wall thickness values and not anticipated rates of deterioration.

Pitting corrosion is the most common form of corrosion found in refrigeration systems. Pitting is usually a slow process causing isolated, scattered pits over an area. Left unaddressed, pitting corrosion will continue to deteriorate the pipe wall and could result in a leak.

Pitting can be measured. However, measuring the pit does not provide accurate wall thickness or loss measurements due to variables such as pipe age and allowable manufacturing tolerances.

As an example, a Schedule 40, 3-inch pipe nozzle has a nominal wall thickness of 0.216 inch, so the actual wall thickness on a nozzle or pipe shell would be acceptable down to 0.189 inch straight from the mill.

Further, prior to 1990 – 2000, pipe manufacturing was not as efficient, and methods built-in a margin of error to meet the allowable tolerance limits. This resulted in piping that regularly measures 20-30% thicker than normal.

If your system or parts of your system were installed before 2000, you have piping with a wall thickness significantly thicker than nominal values.

The value that should be the focus of determining the fitness of your piping, as well as the value your thresholds are defined by – must be the remaining pipe wall thickness.

It is strongly recommended that the testing method you employ also measures to confirm the size and schedule of your piping, rather than relying solely on your P&IDs or assumptions.

Non-destructive testing should be applied on insulated and uninsulated piping in areas where CUI and damage is likely to occur, as well as areas identified as suspect as a result of a Mechanical Integrity inspection.

The testing method you choose (or combination of methods) should be able to provide you with the following data to appropriately determine if the piping meets your tolerance criteria:

Presence of corrosion and locations with concealed wet insulation attribute to maintenance and replacement decision-making to arrest the thinning of affected pipe in your system. However, these conditions do not play a role in determining if the pipe is acceptable to remain in service.

Areas where pipe wall thickness measurements in your system are reported as less than nominal, or are at your defined thresholds, can then be appropriately categorized by severity.

Table A.11.1.1.3.1 of the Standard provides minimum remaining pipe wall thickness values to determine repair or replacement conditions of carbon steel piping. The values offered by the table in the standard are the very lowest possible tolerance levels before running to failure. For this reason, the Standard also states in referencing the table:

“Owners typically use or are encouraged to use more conservative “Alert Thickness” and “Replacement Thickness” values,”

For companies that intend to implement a more stringent level of acceptance criteria, as recommended by IIAR and applied by corporations that maintain best practices, the following table, In-Service Pipe Wall Thickness Thresholds for Ammonia Refrigeration Piping Systems, includes the same metrics as the ANSI/IIAR 6 Standard Table A.11.1.1.3.1 with recommended, more prudent threshold values that are generally acceptable for maintaining a sound system.

If you are looking to develop thresholds that are more conservative than the IIAR’s minimum value table, but less cautious than the stringent approach, email service@inspectpipe.com for the template to adjust remaining wall thickness percentages values.

Please note the values in the table only apply to the pressure envelope of the pipe. They do not take into account other types of loading which may increase the remaining minimum alert and replacement thickness values. 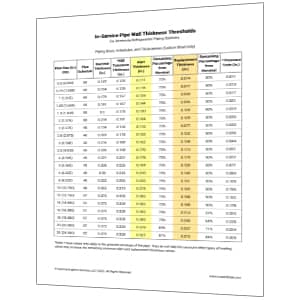